Human rights are up for debate. The sense of how many and what types of rights we have continually expands, and rights’ cultural and political significances are diverse. As Michael Ignatieff (2000) has argued, human rights have undergone a “revolution” in the second half of the twentieth century. This entails human rights’ growth from a limited concept pertaining to international institutions (specifically the UN and the state actors involved) to a broad social concept deployed by ranges of grassroots social movements and individual petitioners for rights. Human rights have become a “master term” in the late twentieth and early twenty-first centuries, as Arjun Appadurai (1990) phrased it – they have become “culturally dominant” in Fredric Jameson’s (1991) sense of the term. Human rights are ingrained in national and international law. They are also ingrained in international political culture. However, the increase in rights’ importance does not add to their intelligibility. Human rights are highly present in global cultural and political debate yet maintain an ambiguity. This is to the extent that rights are simultaneously self-evident and intensely criticized. In order to understand this, this issue of Academic Quarter takes up rights from the alternative perspective of aesthetics, representation and problems of socio-historical context.

This might be explained. Firstly, human rights gain life, or “animation,” via their articulation in political culture in part as art, advertising, written fiction, film, electronic media, the Internet, “lifestyle,” fashion and journalistic reportage. It is rare on a popular scale to read the Universal Declaration of Human Rights or the European Convention on Human Rights. Nonetheless, heard fragments from political speeches and movies, books and newspaper articles present us with a need to “know” rights. We encounter rights in discourse, articulated by politicians and the arts, “high” cultural artifacts and “low” culture as well. Human rights pervade “natural” senses of our everyday world. However, hardly ever do we take the time to think about fundamental questions about rights’ “staging”: what is at work in the presentation of human rights and why?

In the current themed issue, articles focus on the broad cultural and political significance of human rights and their aesthetic forms. By this we mean not the form of the human rights legislation, but the form of the discourses that both support and critique human rights. We focus on life stories that lie behind human rights law: tales of atrocity, witness and interpersonal and intercultural relations. We also focus on the discourses that modulate, explain, politicize or aestheticize such stories. We ask formal questions about presentation, enunciation and aestheticization of rights: who speaks how on behalf of whom? What is the relation between form and purpose in rights discourse? The aim is to rebuild a link often broken: the relation between the form and the content of human rights. The meaning of human rights is often assumed to be inherent. However, there is a need to articulate and represent rights in order to make them real.

As such, we would like to highlight a row of issues pervading the articles in this issue of Academic Quarter. What is the relation between the human and the “humanitarian,” or human and “humanitarian” stories? How do we transpose real-life stories into humanitarian discourses without losing the immediacy, trauma and subjectivity of subjective experience – i.e., not turning subjects into objects? In what form can human rights be enacted and how do we avoid the split between the rights of citizens (one’s ability to speak and be heard) and the rights of “man”: the universal being in his or her natural state? Such problematic splits lay at the core of Aritstotle’s two concepts of polis (the distinction between the polis as inclusive of all, citizens or not and the polis as purely citizens); they sit at the heart of the question of indigenous rights. The problem of rights’ universality and particularity realize themselves in the French Declaration of the Rights of Man and Citizen, and as Hannah Arendt (1958) noted, such issues were radically actualized in the Holocaust and the totalitarian reduction of former citizens to “mere” human beings without any rights at all. Within the twentieth century’s long history, after 1989, the world may have thought for a short instant that the tables might have turned: that is the possibility that global citizenry would be united in universal rights; Francis Fukuyama’s (1992) “end of history” thesis suggested this possibility – a new, liberal world would grant people their rights. However, as Jacques Rancière (2004) has argued, this utopian moment was quickly surpassed; what we have seen in the new millennium is not the “return” of human rights, but the inculcation of the rights of the victim, the rights of the rightless, or as he phrases it, a shift from “Man” to “Humanity, and after that, a transition from “Humanity” to “Humanitarian.” Have we lost the human essence, or recreated it at the end of the twentieth century and start of the twenty-first in a new, conceptual and institutional form?

This begs questions of representation, meanings for the relation between fact and fiction as well as interrogations into of style and genre. How do we handle fictional moments in otherwise realistic testimonies of human rights violations – violations of our “humanity” – and how do we span representational spaces in which rights are a matter of fiction (e.g., films, books, videogames), yet maintain references to “reality?” Holocaust researchers, for example, document that testimonies are never neutral; representation follow rules of “textual” engagement (LaCapra 1996). Joseph Slaughter (2007, 4-5) has similarly argued that human rights law and the Bildungsroman share a “deep narrative grammar”: a specific form of “egalitarian imaginary.” Nonetheless, reports and stories of evil often also carry the mark of silence and trauma and sometimes appear as incoherent or incomprehensible stories.

The question thus arises to whether, for instance, “atrocity tales” – stories of human rights violations – follow culturally-established forms or whether they breakdown normal pattern of narrative and aesthetic expectation. What is the truest form, if any, of representing human rights violations? This question becomes yet more acute when we are second-hand witnesses, when we talk about abuses that have happened to others and we have heard about through those who have had first-hand experiences. How do we get close to their sufferings? How close should we try to get? Respect may demand distance. This is just as truthfulness may demand reflection rather than immediacy. The form of telling about and representing human rights violations nonetheless often takes the opposite form, using violence and pathos to enlarge sympathy with the victims. In some theories about posthistorical, “postmodernized” memory, it has been argued that violence is a necessary means of awakening historical consciousness in a forgetful culture (see Hirsch 2008).

How do we establish critical awareness of the vocabularies through which we speak rights, as well as the social imagery (if not “imaginary”) that backs up seemingly neutral rights claims? We need to discern problems of subjectivity (who talks in the name of who or what), problems of representation (reality versus fiction and style of address) and problems of culturo-historical context – how do specific actors in specific socio-political situations express their political ideas and how are those captured in the contexts of discourses on- and representations of rights? Our hope is that this issue of Academic Quarter helps further discussion on these topics. 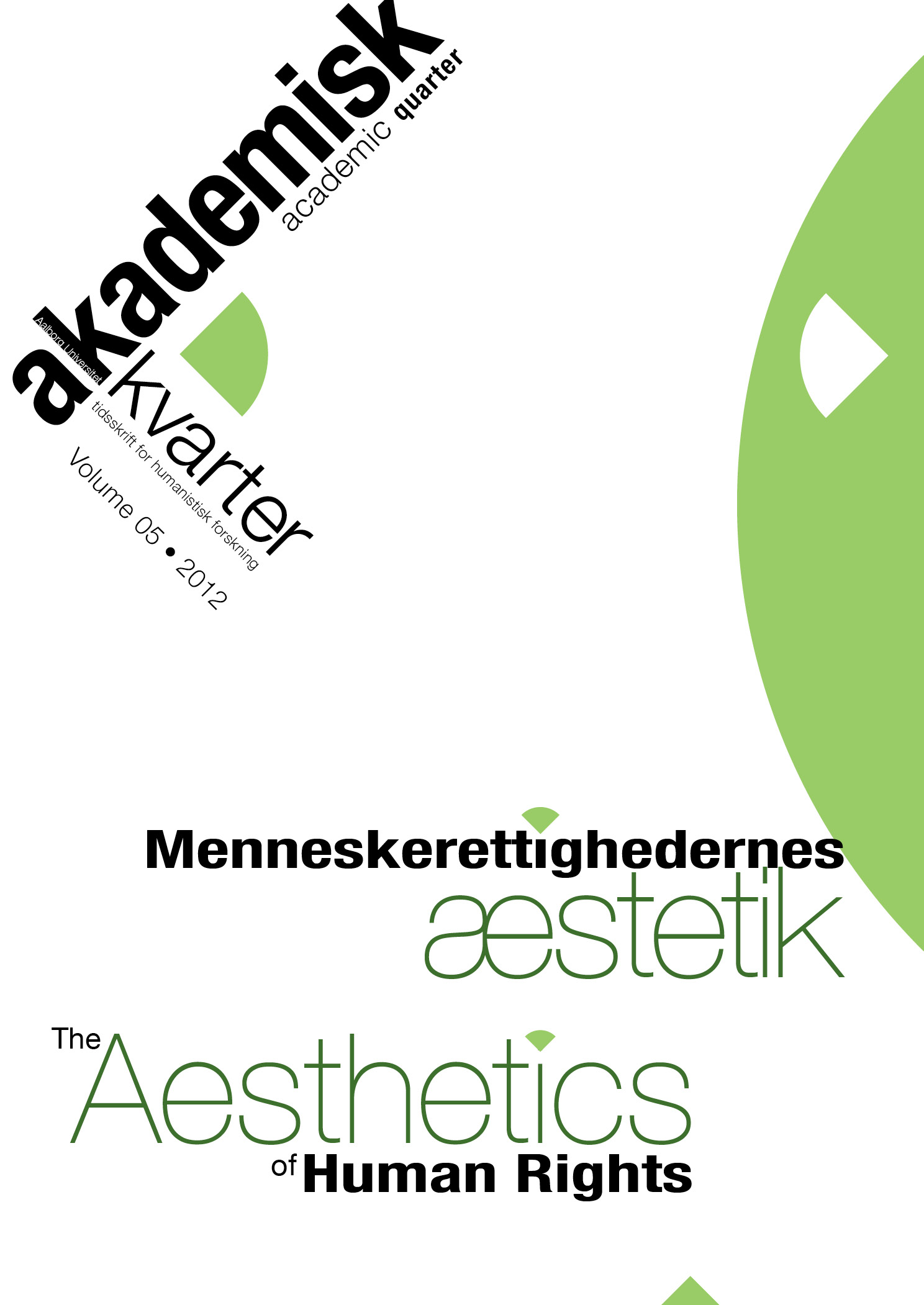