It is well known that different processes have contributed to the creation of a global culture: the internet, sport idols, satellite transmissions, American films and their distribution through DVD rental chains, fast food chains, beverages such as Coca-Cola, brands, shopping malls, etc.

Perhaps the political narratives that made possible a world of more or less free movement of goods, capital, symbols, and partly of people are even more important that these signs, symbols, icons and expressions of a global culture. Without doubt the most important of those narratives has been the new liberalism that has preached the opening of the markets of "non-Western" countries to the products of the West and the orientation of their production to world markets. In this global narrative, wealth, surplus, deregulation and repeal of custom barriers give positive associations, and the state is regarded as an obstacle to dynamic growth and development. After the fall of the Berlin Wall this narrative, which has influenced the policies of different nations on different continents, has provided a breeding ground for what Barber has christened Western culture, MacWorld, a global, homogenized consumer culture, in which the same music is listened to, the same television, is watched, and the same clothes are worn.

In Asia, Latin America and Africa, the fascination of products from Western modernity has had a long history, not only clothes, furniture, and cars, but also culture products. After 1980 the world has witnessed a cultural Americanization through the massive consumption of American material and symbolic products such as the fast food chain McDonald's, Nike and Blockbuster. Shopping Malls have proliferated in Eastern Europe, Latin America and Asia, American through and through in their origins, but now notable symbols of the global culture. The film industry, especially Hollywood, and cable TV have created a common world of the imagination with figures, characters and narratives that make it possible for the audience of the world to project experiences, dreams and aspirations into them and through them.

The same concept is realized in different countries through programs such as Strictly Come Dancing and The X Factor. Programs such as these contain tales like Believe in yourself and It is good to be famous, and in this way there are also global tales at a micro level.

The new liberal narrative is a political narrative at a macro level, which leads to some minor narratives. One of them is the new understanding of the role of universities as helpers of private enterprises. It is a reversal of the situation in the 1960s, where the prevalent idea among some teachers and many students was that the university should serve the working classes. Today, and because of the dominance of neoliberal and management discourses the prevalent idea is that the universities should aid the European nations and other nations around the world in the global economic struggle. Not only business studies, but also the humanities and social sciences in universities have had to justify their use to private enterprises, and forms of research and teaching have been developed where the purpose is the resolution of potential problems in the markets, characterized by something other than the national culture.

Other global narratives with political and economic dimensions are those that refer to climate questions and tourism.

But global narratives are not only political and newly minted. Global tales do not necessarily pertain to modern societies, but they may also be stories of any time common to all mankind. There is a treasure trove of legends and myths from different parts of the world with universal themes, dilemmas and morals. These can be found again in for instance folktales and cartoons, where the story is appreciated in a common understanding.

Today, identity is not only shaped by an a priory tradition or culture, and the individual can to a certain extent create its own self-perception. The framework for this is postmodernism, which can be regarded as a global tale as well. In this tale, cultures, subjects, and identities are seen as temporary and provisional, and in principle negotiable.

Earlier on, the local world - the family, the village, the nation etc. - had the most decisive influence on ideas and relations, but today the access to the rest of the world is easier, both in a concrete physical sense and in a technological sense, and ideas and relations have their point of departure in a more global perspective. It is generally known that changes in one place may create global changes. For instance it is not enough to think nationally, as not everything can be contained within borders, e.g. questions of climate and of economics. This heightened interaction causes displacement of cultures.

The individual can participate in the creation of social influences through its creation of its own identity, and these social influences are of a global nature in their consequences. We are surrounded by narratives and possible choices, but the choice we make in every single situation has consequences for not only our own personal narrative, but also for the narratives of others. And vice versa. This tendency is strengthened as we get more closely connected in networks of information technologies, media etc. We are in a dialectics between the local and the global.

The total global frame of reference is enormous, and new, more uniform tales of a more global character may arise. It may even be ventured to say that globalization is also an epoch of global narratives.

The contributions to this issue of Academic Quarter present different global narratives either from a political, artistic, religious perspective or from the dialectic between the global and the local. 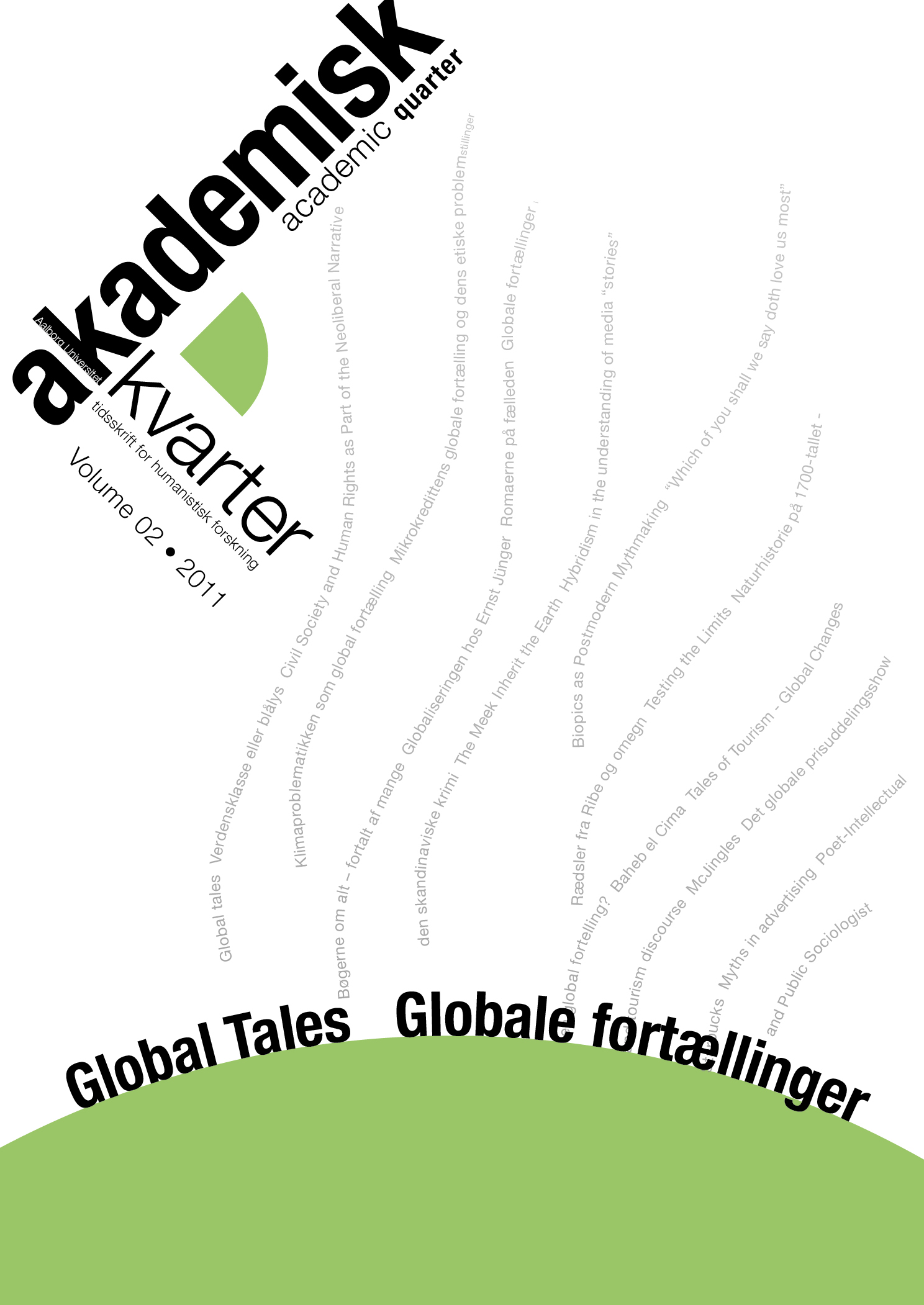